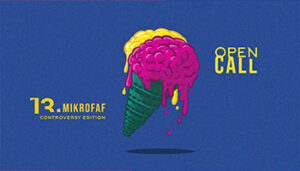 MikroFAF welcomes films from all around the globe that are created by passionate filmmakers under unlimited artistic conditions, but often limited production conditions. Through various programmes, we promote art freedom, by focusing on independence, guerrilla film, inovation, lo-fi, experimental forms and self-organising in creativity.

This year, MikroFAF has its 13th edition – some would say ominous, which corresponds with this year itself, marked by scary and gloomy prospects of energy crisis, hunger, and even possible nuclear catastrophe. But we want to overcome the curse of this number and drive bad luck away. According to some beliefs, number 13 marks the end of a cycle and beginning of a new one. Also, there is even a controversy between cultures that consider this number an unlucky one and those cultures who see it as a lucky one. So, where are we now in all these tumultuous and contradictory times? Do we turn our blind eye to the controversies that surround us, or follow the others, or try to define our own view?

We would like to see your sincere and uncompromising answers to the questions raised by the latest global developments, and their reflections on your closer surroundings and your inner self. How do you neutralise curses, defy the odds and fight bad luck? What is your spiritual talisman? How do you reconcile your own contradictions and how do you navigate through the controversies of this world? How do you (and do you at all) manage to stay in one piece, in a world that moves as if it has lost its compass.

Send us your film answers via FilmFreeway platform until 25th of August 2022.

Short DIY Film. Refers to films of all genres (fiction, documentary, animated, experimental…), topics and production techniques, made in non-professional circumstances, without the involvement of film professionals and without professional obligations during or after the production.

Independent Short Film. Refers to films that do not match the above mentioned DIY criteria because their making involved professionals, but were made in independent production, without commercial and producers’ pressure.

Junior Film. A category intended for filmmakers who were not older than 18 at the moment of creating submitted films.

– The deadline for submitting entries is 25th of August 2022.

– Acceptable duration of short films is up to 15 minutes.

– A maximum of 3 films can be submitted by each author.

– There are no restrictions on the country of origin of the author.

– The author must indicate which category they are entering the film for:

– Films that are not in Serbo-Croatian or English must have subtitles in one of these languages.

Note: Once entered, it is not possible to withdraw your film from the festival. The festival holds the right to show the chosen films several times as part of the selection of the festival yearly programmes, as well as to use clips or stills from the films for promotional purposes.