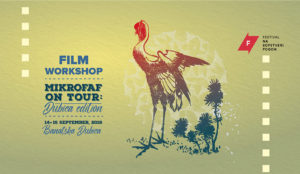 On the 9th MikroFAF festival’s eve, a three-day practical guerrilla film workshop will be held in the village of Banatska Dubica. Residents of Dubica and Jarkovac will have opportunity to participate in a free training about short film making, using facilities of Moba studio.

Starting from the belief that expensive production doesn’t guarantee success, and that a motivated individual or team and their strong idea will not go unnoticed, MikroFAF recruits both young and elder as the new participants of amateur film scene.

The workshop agenda includes creative games and idea development during the first day, while the short film itself will be shot on the second and third workshop’s day. The collective film produced in this way will have its premiere at the 9th MikroFAF in Belgrade (October 17-19, 2018).

Equipment and refreshment for the workshop are provided, and participation is free for everybody.

The workshop is co-organised by Satibara from Belgrade and NGO Moba from Zrenjanin, Serbia.

We recommend you to apply for participation in time, because the number of participants is limited. Just send your name and contact to our e-mail, Facebook or Instagram.

The workshop is a part of nationwide festival SELF-PROPELLED, which will be held during September on many locations all over Serbia. It’s organised by the Association Independent Culture Scene of Serbia.