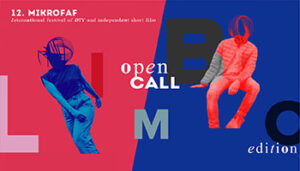 OPEN CALL FOR FOR THE 12th MikroFAF

OPEN CALL FOR FOR THE 12th MikroFAF

In 2021 too, MikroFAF opens room for everyone interested in film, especially those ones who create in restricted conditions. Through various programmes we will promote art freedom, by focusing on independence, guerrilla film, inovation, amateurism, art brut, lo-fi, experimental forms and self-organising in creativity.

Due to the still present pandemic, 2021 levitates somewhere in between uncertainty and return to normality. Between the two clear situations, there is an undefined limbo where we are now – like when you’re not a butterfly yet, but you’re not a caterpillar any more. Last year, probably the most inhabitants of our planet expected that until today life would return back to that time “as before”… But this year is a very strange one. Uncertainty rules. Neither we won pandemic, moving freely again, nor we are in that kind of hell when we snooze our life every couple of weeks, like until recently. Globally, we are somewhere in between. In a limbo.

Everything we do, conceive or plan is halfly in a way. Neither here, nor there. Not exactly as in Dante’s inferno, but either we haven’t left its antechamber yet. Whole nations and civilisations can find themselves in such a limbo. Our humble lives too. Between the worlds that meet and contact each other, there are entry gates, where many questions are asked. Which questions do need to be answered in your limbo? What does change in your world and in what sense and direction? How do you feel about it and how do you handle it?

Send us your film answers via FilmFreeway platform until the 5th of September, 2021.

And then we will gather together, in some of the OFF or ON realities, this autumn!

Notes: Once entered, it is not possible to withdraw your film from the festival. The festival holds the right to show the chosen films several times as part of the selection of the festival yearly programmes, as well as to use clips or stills from the films for promotional purposes.