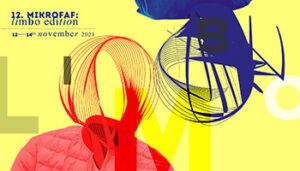 12th MikroFAF, entitled Limbo Edition, will be held on November 12-14, at the Museum of Yugoslav  Film Archive in Belgrade, Kosovska street 11.

This year’s festival edition is focused on films searching for the answers to questions about the creative process while the artist is in a limbo of any kind – emotional, artistic, bodily, social, spiritual, global… How does it feel when we divide time to the period before and after 2020, when the things previously considered normal are now called offline activities? Is limbo perhaps a golden mean, a balanced undefined state in which one can live and create happily? Or it’s a nightmare the artist can’t wake up from, while being aware that it’s an unpleasant dream?

The competitive programme consists of 68 films, lasting from 1 to 15 minutes, made by authors of very different ages, with budgets ranging from zero to thousands of dollars. Non-competitive programme will be dedicated to young filmmakers from different parts of Serbia, participating in Satibara’s and MikroFAF’s projects of cultural decentralisation through Inclusive Film Club My Close-Up. The audience will see 8 films made by young participants of educational film workshops in 2021.

Members of this year’s jury are film artists Staša Tomić, Aron Sekelj, Nikola Stojanović i Nađa Petrović. They will give Mikropolis awards and special mentions in the three main categories: indie film, DIY film and limbo film. Members of jury for junior selection are Aleksandar Gubaš, Jelena Novaković i Mileva Lekić, and they will highlight the most outstanding creations by filmmakers younger than 19.

Films that will be screened in these three days come from Europe, Asia, USA, Mexico and South America; very different genres are represented; the youngest director is 9 and the oldest 77 years old, and all of them will get their chance with the audience.

12th MikoFAF is organised by Satibara from Belgrade, with the support from the Ministry of culture and information of The Republic of Serbia.