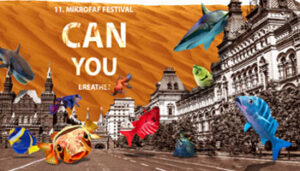 CALL FOR SUBMISSIONS FOR 11th MIKROFAF

In 2020, MikroFAF will continue the tradition of connecting, promoting and introducing DIY film authors and independent production. Again we shall open the space for everyone who is interested in film, especially those who create in limited conditions. Through various programs, we will promote artistic freedoms, focusing on amateurism, independence, guerrilla film, art brut, lo-fi, experimental forms and self-organization in creativity.

The eleventh edition of the festival will be held from November 13th to 15th at the Museum of the Yugoslav Film Archive in Belgrade. The motto of this year’s MikroFAF is Can You Breathe?, with which we want to draw attention to the global sociopolitical unrests and turmoils that marked 2020 with their negative consequences and difficult challenges. These changes, unprecedented for many generations, prevent free movement, working, expressing yourself, survival of the arts, standard social life, breathing… That is why we will dedicate a special competition category to films dealing with the consequences of the pandemic, the escalation of racism in the US, the strengthening of the right-wing movement in Europe, endangering the survival of art and artists, suffocating media and personal freedoms, economic turbulence… As a result of all these phenomena, 2020 has brought us dramatic restraints of physical freedom and threats to mental health. Isolation, either physical or in the form of xenophobic denial of racial and cultural diversity, produces effects of anxiety and displacement from everyday life and spiritual suffocation, and therefore humanity is spending this year globally like a fish out of water. Positive outcome is also possible, in terms of reinforcing solidarity, uniting in solving community problems, rebellion against discrimination and abuse of power. We invite you to reflect upon these topics and to raise questions through your films, which will be great contribution to 2020 edition of MikroFAF.

Notes: Once entered, it is not possible to withdraw your film from the festival. The festival holds the right to show the chosen films several times as part of the selection of the festival programme, as well as to use clips or stills from the films for promotional purposes.